Recently, as a homeschool project and in anticipation of starting our own beehives, we visited a successful bee farm in Tennessee. We contacted Tim Durham Sr. ahead of time via phone to see if we could drop in and see his hives. When we arrived in the humid afternoon, I was surprised to find a small portion of the Durham’s bee farm right in their own backyard, in the middle of a rural neighborhood. Mr. Durham graciously introduced us to his bees and allowed us to watch as he opened a hive and checked on a new queen that was being introduced to the hive. She was in a little cage and the entrance was plugged with “candy.” He said that by the time the worker bees ate their way through the candy, they would be used to the new queen’s smell, and accept her as their new matriarch.

“Now, you fellas be nice and get to know your Lady. She’s a good one, and you better be sweet to her…”

“Do the bees know you?” I asked, watching them crawl over his hands, and buzz around in his face without stinging him.

“Funny you should ask,” said Mr. Durham, “I really think they do. Recently there was a test conducted that proved honeybees prefer the face of their own keeper. When shown photographs of various people, the bees would favor the photograph of their own beekeeper. They know me all right.”

I learned a lot about bees that afternoon, and went home with an absolute amazement over the benefits of bee products.

Honey is the nectar of the herbs and flowers that grow wild in the fields and woods. The benefits of hundreds of herbs are carried in the form of nectar in the stomach of the bee where it is subtly altered by the bee’s digestive enzymes in ways that modern science has been unable to explain. New health benefiting compounds are created by this process before the honey is regurgitated in the hive, concentrated by evaporation, and stored in honeycomb. Because of the high natural sugar content, Honey absorbs moisture in wounds, making it hard for bacteria to survive. Many honeys contain large amounts of hydrogen peroxide which is regularly used to disinfect cuts and scrapes. Most raw honeys contain some propolis, a compound that can kill bacteria. In laboratory tests, honey put on seven types of bacteria killed all seven!

What is Raw Honey?

There is a difference between raw honey straight from the hive, and processed honey which you buy in stores. Any honey is good for you, but raw honey is by far the best since it has not been through a heating process (over approximately. 120 degrees) to melt the sugar, which also kills the wonderful enzymes and bacteria that are so rich in healing properties. Raw honey can be purchased from local bee farmers in your area.

WARNING: Children under twelve months of age should not eat honey as there is a risk of botulism.

And you thought honey was sticky! Propolis is made from a sticky resinous material that western bees gather from tree buds or sap flows. The sap usually comes from coniferous trees and/or Poplar trees. A worker bee will tear off tiny amounts of resin and place them in her pollen baskets (the middle portion of each back leg) and then carry the resins back to the hive. House bees (young bees) unload the resins at the hive and mix them with pollen, wax and enzyme-rich salivary secretions. The finished propolis resembles cement, or glue, and is used to to build or repair the hive. Propolis covers virtually every centimeter of the hive, acting as an antibacterial sealant, and is a sanitary covering for all hive surfaces.

A Mummy Mouse in the Bee House!

From time to time some unfortunate little critter will get into a beehive; most commonly a mouse or a lizard. The bees will sting the invader to death, but are not capable of removing the carcass from the hive. To keep the dead animal from rotting in the hive the bees will coat the carcass with propolis. Amazingly, such propolis-mummified animals remain undecayed for years. The powerful flavonoids in the resins, which the bees collect to make propolis, are an anti-viral shield for the hive. Not only does propolis protect against viral infections, but against bacterial and fungal invasion of the hive. The same things propolis can do for a hive, it can do for you… 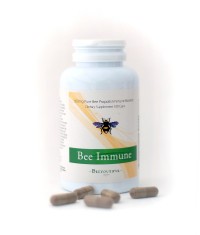 Propolis has been used topically for skin problems ranging from the ordinary abrasion, to advanced herpes in the mouth, gum infections, eczema, acne, skin cancers, bruises, burns, and… well, pretty much anything that can go wrong with skin. The high percentage of flavonoids in Propolis results in a remarkable immune boost when taken internally. Because of this, my favorite way to take propolis is in capsule form along with Rosehip vitamin C. Th is combination will stop a developing common cold in its tracks. Just last week I woke up with a sore throat, swollen glands, and aches. I took three Bee Immune propolis capsules, and 2000 mg of Rosehip Cevery other hour all day. The next day I was completely well, with no cold symptoms remaining.

Bee pollen is the dust-sized male seed, required for the fertilization of the plant, found on the stamen of all flower blossoms. Once a honeybee arrives at a flower, she nimbly scrapes off the powdery pollen from the stamen with her jaws and front legs, moistening it with a dab of the honey she brought with her from the hive. Her legs have a thick crowd of bristles called “pollen combs.” The bee uses these combs to brush the gold powder from her coat and legs in mid-flight. With a tapping movement of her auricle, which is used as a hammer, she pushes the gathered pollen into her baskets. Her pollen baskets, surrounded by a fringe of long hairs, are simply concave areas located on the outside of her back legs. When the bee’s baskets are fully loaded, the pollen dust has been tamped down into a single golden granule. This pollen-gathering bee now takes the pollen back to the hive where younger house bees unload the pollen. They secrete nectar and special enzymes into the flower pollen to create what we know as “bee pollen”. Bee pollen is food for the young bees.

Bee pollen is approximately 40% protein. It is considered one of nature’s most completely nourishing foods. It contains nearly all nutrients required by humans. About half of its protein is in the form of free amino acids that can be directly absorbed by the body. Bee pollen is taken by athletes and body builders to increase stamina and speed. Th ere are countless stories of impressive athletic improvement attributed to the regular intake of bee pollen. Most believe this is due to the pantothenic acid in bee pollen which helps the body build resistance to stress, and aids the production of the adrenal-cortical hormones. When the glandular system is adequately nourished with sufficient pantothenic acid (as found in bee pollen) it creates a powerhouse of vitality and energy.

Bee pollen also stimulates the metabolic processes. It speeds caloric burn by lighting and stoking the metabolic fires. Bee pollen is a low-calorie food, containing only ninety calories per ounce. (An ounce is about two heaping tablespoons.) It offers 15% lecithin by volume. Lecithin is a substance that helps dissolve and flush fat from the body. Bee Pollen also satisfies many “cravings” by meeting your body’s vitamin and mineral deficiencies.

Some doctors and dermatologists say that bee pollen seems to prevent premature aging of the cells and stimulates growth of new skin. It may offer protection against dehydration and inject new life into dry cells. “The skin becomes younger looking, less vulnerable to wrinkles, smoother, and healthier with the use of honeybee pollen,” Dr. Essen of Sweden says. “Taken internally or used externally, bee pollen exercises a suppressive effect on facial acne. It is also an important skin rejuvenator, primarily because it contains a high concentration of the nucleic acids RNA and DNA as well as a natural antibiotic factor.”

Now that you know everything about honey… Drizzle warm honey on fresh cut slices of buttered bread, sprinkle with cinnamon powder, and toast on a cookie sheet in the broiler

Beeyoutiful Products Mentioned in This Article